Skip to content
smithgregm Christianity, Gospel according to Greg, Updating the Gospel May 28, 2019 6 Minutes 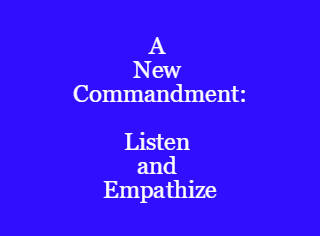 As part of the continuing drive to expand the Gospel, I propose a new commandment: that we listen to and empathize with each other.

Jesus gave a pithy summary of Jewish law in Matthew 7:12: “Do to others what you want them to do to you.” This “Golden Rule” is a foundational moral principle for multiple ethics systems. It guides you to think beyond your narrow self-interest, to envision what it would be like if you were on the receiving end of your own behavior.

The wrinkle in this commandment is that it still places you at the center. You are the measure of things. You are to imagine how you might feel in someone else’s shoes, which might be fine in a society where everyone wears sandals. But what if some people feel very differently from how you think you’d feel in their place? Your life experience has shaped who you are; what if their life experience has given them a perspective that is difficult for you to imagine? The Golden Rule makes it all too easy for us to substitute a version of ourselves for the raw fact of another person’s life. If other people react differently than we would in a situation, then they are alien, wrong, and in need of correction.

This has all kinds of ramifications for do-gooding. This encourages us to substitute our obviously superior understanding for the perspectives expressed by others. We can feel compassion for others without ever really hearing them. We can provide charity with a parental hand, trusting that we know their needs better than they do themselves. We can feel sympathy for them without feeling empathy with them.

The first part of that new commandment is to listen. Through my involvement in an organization called Stephen Ministry, I have grown to understand both how healing it is to be heard and how rare. The preponderance of the training for lay Stephen Ministers involves simply learning how to listen. The training lasts for forty hours, which underlines just how difficult listening is for most of us. Although we are told that we shouldn’t judge, it’s all too easy for us to look at another person’s situation, recognize what we think they should do, and give advice. That feels like we’re helping, but often we’re simply overriding their perspective with ours.

True listening is inefficient (in our speeded up, quick fix society). It takes a long time, but it shows true caring. I have discovered how hungry people are to be heard (rather than being told what to do). There’s no shortage of advice (religious or otherwise) in our society; there’s a shortage of the time-consuming commitment to listen. When we give quick, easy, unasked-for advice, we are belittling the other person’s capacity and effort to deal with their own problems. “Judge not” is the negative version of this commandment; I suggest that the positive version begins with listening.

(You may have noticed that my recommendation to followers of Christ about interacting with others is remarkably similar to my main suggestion about praying: “first, shut up!”  And yes, I recognize that I’m giving advice here, but I think that the suggestion to listen is different. It’s advice to stop advising so quickly.)

The second part of the commandment is to empathize. This is a step beyond the liberal emphasis on “tolerance.” I understand why we liberals no longer talk so much about tolerance. It’s a namby-pamby goal; it’s hard to muster much passion for mere tolerance (I am reminded of Sean Penn’s award acceptance speech: “You tolerate me! You really tolerate me!”). Part of me says that I’d be happy with more tolerance in these divisive times, but another part believes we need a higher goal. And so even though tolerance is in short supply these days, I advocate for empathy.

As a film and television scholar, I have thought a good deal about empathy, since film and television are basically empathy machines. Part of the reason I was attracted to the field was the belief that film and television are ways for us to vividly, powerfully put on someone else’s perspective. I still believe that is true; I also see the both the power and the limitations of that idea. I see how perspective can be commodified and packaged in ways that alter it by making it more palatable, and I understand we can flatter ourselves for how tolerant we are by accepting a commercialized Other in film/TV.

The well-established rules of screenwriting tell us that to make us care about a character, it’s best to establish that the character is a “person like us,” that even though they may appear to be different, we share some basic characteristics “under the skin.” There are many, many cultural assumptions about what qualities are potentially sharable qualities and which aren’t. We are engaging in many interesting narrative experiments today about empathy with characters, and that is doing undeniably important cultural work. However, empathy with characters isn’t quite the same as empathy with real people who haven’t been shaped for public consumption. As important as media are for broadening our understanding of others, they aren’t a substitute for interactions with the raw humanity of someone different from yourself.

Media are empathy technologies, yes; but I neglected to realize that they are also judgment machines. By watching so many films and so much television over the years, we have become expert at calibrating degrees of empathy with characters; we have also become quite good at the judgments required by storytelling.

One of my favorite examples is the first time that Raiders of the Lost Ark shows us Toht, the Nazi. We don’t know anything about the character, but before he even speaks we are immediately expected to read him as a villain based on his beady eyes behind his reflective wire-rim glasses, his thin lips, and his overall smarmy appearance. To get the full rollercoaster pleasure of Raiders, we need to know how to judge bad hombres by their appearances in an instant. We are now very practiced at doing this, and we do it in film, television, social media, politics, walking down the street.

I entered the field of film/television studies with hopes about how media could enlarge our perspectives, and I still believe in that. I also now recognize how good we have become at the counter-tendency: snap judgments. I remain hopeful about empathy, though I wonder if we need a better basis for empathy than discovering that we’re “all the same underneath.” That feels to me a lot like substituting my own experience for others.

If you’re a follower of Christ, maybe the right basis for empathy is the same unearned basis we all have to lay claim to God: that we are all God’s children, not because of our actions or values or experiences. We don’t have to find ways that the other person is like us before we extend our empathy to God’s children. This empathy looks for the God within, even when the person makes choices or says things that are inexplicable to us. God is the measure for empathy, not our limited human experience.

One might say that empathizing with others (the disenfranchised and disempowered) would be a bad idea for anyone trying to create policy for those people. Policymaking requires the ability to make tough decisions, after all. I would assert that listening and empathy are vital to good policy. One may make tough pragmatic decisions, but you have done so after truly hearing other people’s perspective, not mansplaining or Christiansplaining their experiences for them. Empathy may make it more difficult to make policy decisions, but those decisions will be grounded in people’s lives, not simply in narratives of our own choosing.

Empathy is not weakness; it requires bravery and effort, particularly for those in positions of power or authority. This blog post is not focusing on the political side of things, but if I were to give advice to Republicans (yes, unsolicited advice! It is a difficult habit to give up!), I would say that the public perception of your decisionmaking is remarkably lacking in empathy. Empathy is not at odds with “toughness” and “pragmatism.”

As I discuss ways to expand the Gospel today, many of these expansions (such as Nadia Bolz-Weber’s revised Beatitudes) have to do with how to follow Christ in a diverse world. This goes far beyond not judging others (which is difficult enough!) for being different. It goes beyond assuming that others are like you (allowing you to bypass the tedious, frustrating, inefficient task of listening to them). It recognizes that other people’s lives may be so different from your own that it never occurs to you that there can be another way of being-in-the-world. If we need a miracle today, we need God to cure us of our own blindness and deafness to the experiences of those unlike us.

View all posts by smithgregm